Good news from Redmi! New devices are on the way. Redmi’s new mid-range killer device series is getting ready to be launched! Redmi’s expected new devices spotted in TENAA certificate and our IMEI databases! 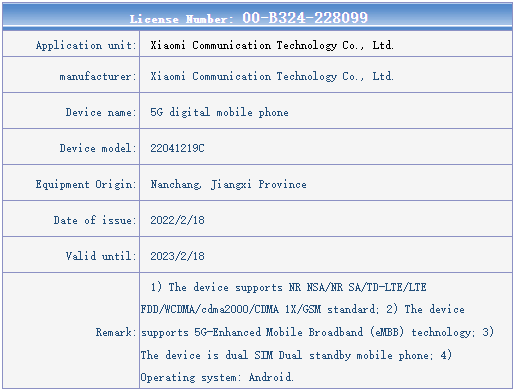 According to the information we got from the TENAA certificate and our IMEI database, a new device series called 22041219C model number (i.e. L19 series) is getting ready to be launched.

The codenames of the new Redmi devices are “thunder” and “light”. Devices MIUI version is V13.0.1.0.SLSCNXM. Which means the device will releasing with MIUI 13 based on Android 12 and the MIUI rom code is LS.

Based on this information we have, we think that the device may be Redmi 11X 5G, Redmi Note 11X 5G or a new Redmi Note 12 series. According to the roadmap of the Redmi company, a new device should be released at least every 6 months.

Here is the Global version of the new Redmi device.

And here is the India model.

There is also a Global model here but NFC supported version.

You know, POCO devices are the re-brand version of Redmi devices. Here too the new POCO device is spotted.

And this is the India variant of the new POCO device.

We will be waiting for new developments. If you want to stay up to date and learn new things, continue to follow us.