New Xiaomi smart watch passed the Ministry of Industry and Information Technology 3C certification. 3C certification is a certification like CE certification used in Europe and Turkey. The China Compulsory Certificate mark, commonly known as a CCC Mark, is a compulsory safety mark for many products imported, sold or used in the Chinese market. It was implemented on May 1, 2002 and became fully effective on August 1, 2003.

Get more info about the certification on Wikipedia. 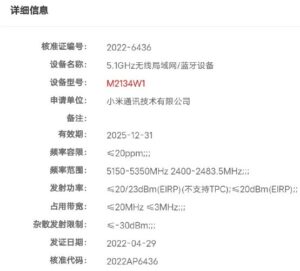 The model name of new Xiaomi smartwatch is M2134W1 as it appears on official resources.

The first generation of Xiaomi Watch(the 2019 edition) has a built in a fully functional eSIM chip that supports the phone calls directly from the smartwatch and internet access but later on eSIM functions were not continued. And yet Xiaomi’s choice haven’t been changed and no e-SIM is available on this model as well.