POCO is all set to launch the POCO X4 Pro 5G and POCO M4 Pro 4G smartphone globally on February 28th, 2022. Surprisingly, the POCO M4 Pro 5G, which was launched in India won’t be launched globally. In hand images of the POCO X4 Pro 5G and its key specifications has already been leaked on the internet. The POCO M4 Pro 4G has now been listed on the Google Play Console certification, which sheds light on some of the device’s specifications.

The upcoming POCO M4 Pro 4G has been listed on the Google Play Console with the codename “fleur”. Which is same with Redmi Note 11S 4G. The Google Play Console confirms that the device will be powered by the MediaTek MT6781V SoC with 2X ARM Cortex A76 and 6X ARM Cortex A55, which is nothing but the MediaTek Helio G96 4G chipset. The Redmi Note 11S power-ups from the same chipset. The certification also confirms the 6GB RAM variant of the device as the model listed on spotted running on 6GB of RAM. 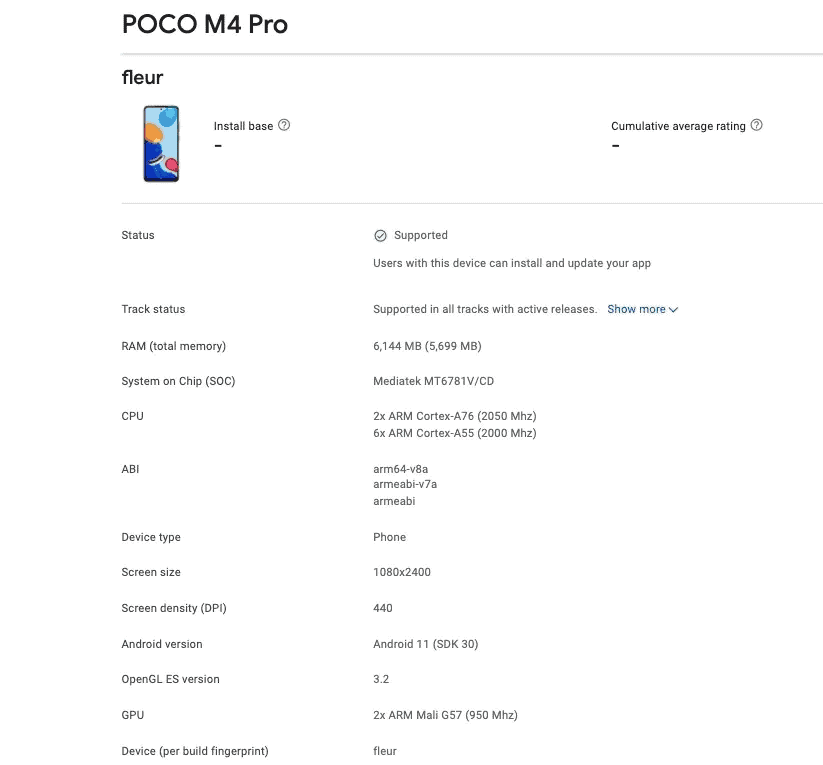 The device will have a screen resolution of 2400*1080 pixels and a 440 PPI pixel density. The device will boot up on MIUI for POCO based on Android 11 out of the box. So that was all the Google Play Console mentions about the forthcoming device. As for the specifications, it is expected to be the rebadged version of the Redmi Note 11S smartphone.

It may offer specifications like a 6.43-inches FHD+ AMOLED display with a 90Hz high refresh rate, HDR 10+ certification and centre punch hole cutout for the selfie camera. The device will be powered by the MediaTek Helio G96 chipset paired with up to 8GB of LPDDR4x RAM and 128GB of UFS 2.2 based storage. It is also expected that the device will bring a triple rear camera setup of 64MP wide+ 8MP ultrawide+ 2MP macro and a 16MP front selfie snapper. It will have a 5000mAh battery with the support of a 33W Mi Turbo charge.