POCO X4 GT launch could be just around the corner as the smartphone has appeared on Thailand’s National Broadcasting and Telecommunications Commission (NBTC) website. The Poco X4 GT is likely to succeed the POCO X3 GT smartphone that debuted in October last year. Recently, the smartphone has also been spotted on multiple certification sites including IMDA and BIS India. The handset is rumored to come with a MediaTek Dimensity 8100 SoC and a 5,000mAh battery. It is also said to sport a 6.6-inch LCD display and run Android 12. 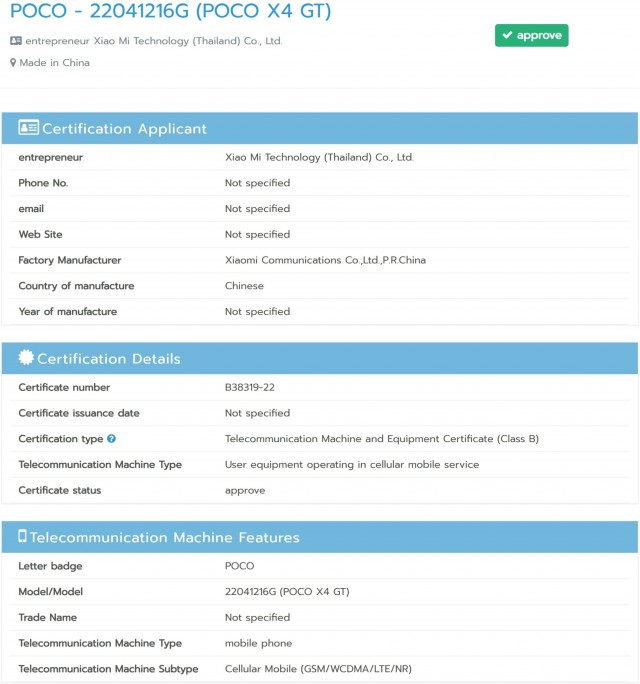 Recently, the POCO X4 GT with the same model number surfaced on the IMDA, and BIS India websites further adding to speculations of a nearby launch. However, Poco has not yet confirmed any details about the X4 GT.

However, if rumors are to be trusted, the POCO X4 GT will be a rebranded Redmi Note 11T Pro unveiled last month in China, which features a 6.6″ FullHD+ 144Hz LCD display, triple rear camera setup with 108MP main camera, 16MP selfie camera, a 5,080 mAh battery with 67W wired charging and a Dimensity 8100 SoC under the hood. We are still waiting for an official confirmation about the smartphone and hope to learn more about it in the coming weeks.

Head over here to read more details about the smartphone.