The POCO India, via its official social media handles, had confirmed the launch date of its upcoming POCO X4 Pro 5G in India. The company is all set to launch the device in India on March 28th, 2022 at 12 PM IST. The brand also claims that it will be India’s first advanced Mocap launch event. We are still not sure about this term. 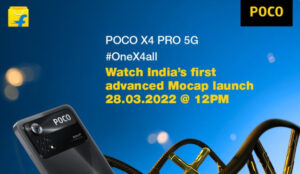 The X4 Pro offers an upgraded triple rear camera setup with a 64MP primary wide sensor, 8MP secondary ultrawide and 2MP macro. It also has the same 16MP front-facing camera. It comes with additional features such as support of NFC, Dynamic RAM Expansion, 3.5mm headphone jack, IR Blaster, and Dual stereo speaker support. The device will boot up on MIUI 13 based on Android 11 out of the box.