Xiaomi has shared a new teaser image, which claims that the K50 Gaming Edition has set 15 new benchmarks for a smartphone. The device has been graded with an A+ ranking by the DisplayMate. The device was reportedly surpassed many latest devices in terms of DisplayMate rankings. According to the ranking, the display used in the Redmi K50 Gaming Edition has the highest level of contrast, white balance and colour accuracy available on any smartphone. 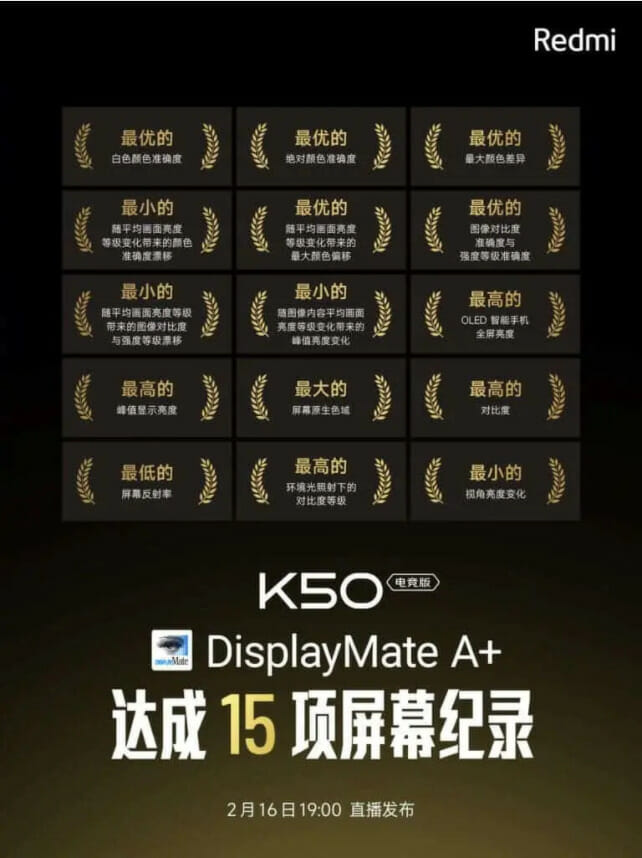 The report further says that the OLED display used in the device has the highest full-screen brightness available on any smartphone to date, with colour gamut and lowest display reflectance. As a gaming-oriented smartphone, it has 10X more touch responsiveness to make gameplay smoother, stable and accurate. The display is also protected by the Corning Gorilla Glass Victus, giving it an edge when comes to the pre-installed display protection features.

Xiaomi also claims that the display on Redmi K50 Gaming Edition is well precise and professionally tuned to provide real-life colours in the display and in the gameplay. To serve you smoother gameplay, the device comes with not only one, but two whole cooling chambers with the size of 4860 square mm, it is almost double of 2900 square mm available on the Xiaomi 12 Pro. It will further come with the strongest haptic motor available on a smartphone yet. The device will launch with the support of the company’s latest 120W HyperCharge paired with a 4700mAh battery.