Xiaomi Global is gearing up to launch the Redmi Note 11 Pro+ 5G smartphone globally. The company will launch the device globally on March 29th, 2022 at 20:00 GMT +8. Well, ahead of the official launch, the smartphone has been started selling in offline markets are live images of the device has been leaked online revealing some of the key specifications and overall look of the device.

The upcoming Redmi Note 11 Pro+ 5G has reportedly started selling in offline markets ahead of the official launch. The images of the device have also leaked online, which confirms that it is the same device that was launched in China. The same device was launched in India as Xiaomi 11i HyperCharge. From the back, the device can be seen in the green colour variant will the same design and Redmi logo aligned vertically on the bottom left side of the device. 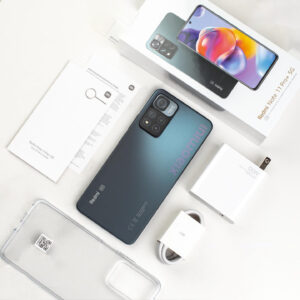 The packaging wrap confirms that the device will be powered by MediaTek Dimensity 920 5G chipset. It will have support for 120W HyperCharge with 4500mAh battery capacity. The device will have a 6.67-inches AMOLED display with support for a 120Hz high refresh rate and the global variant will retain the dual stereo speakers tuned by JBL. It will also have a triple rear camera with a 108-megapixels primary wide sensor. Sadly, Redmi Note 11 Pro+ 5G will boot up on MIUI 12.5 based on Android 11 out of the box.

In terms of box contents, it will include a 120W adapter and a USB Type-C charging cable. It will also include a transparent TPU back cover, a SIM ejector tool, and some important paperwork. In comparison to the Chinese variant, no significant changes have been made in the Global variant. More information about the device will be released at the official launch event.