MediaTek has officially announced the MediaTek Dimensity 8100 5G chipset. It’s a great flagship chipset and packs some powerful pieces of tech inside. The chipset is a slightly toned-down version of MediaTek Dimensity 9000. It offers some great specifications like a powerful 9-core Mali-G77 GPU and HyperEngine 5.0 game engine. Now, Xiaomi has confirmed the appearance of the Dimensity 8100 chipset on one of the devices from the upcoming Redmi K50 series of smartphones. 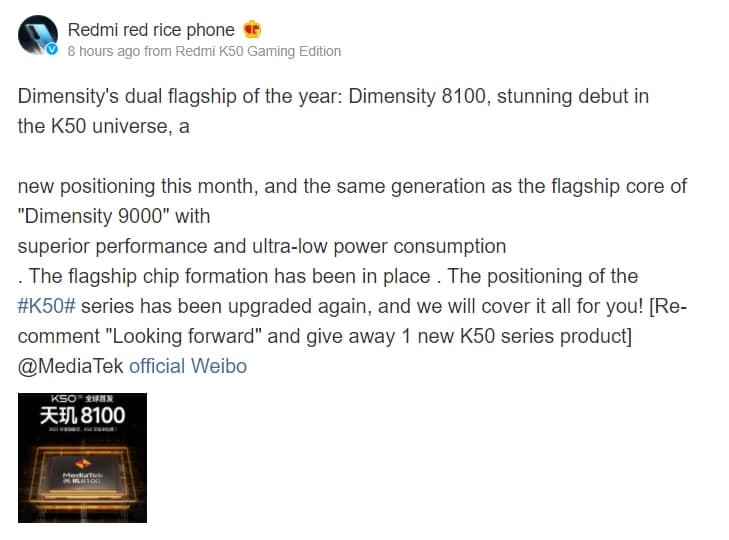 As for the specifications of the chipset, it uses four powerful ARM Cortex-A78 cores clocked at 2.85GHz and four power-saving Cortex A55 cores. As for the graphic-intensive tasks and gaming, the chipset offers  Mali-G610 MC6 GPU with MediaTek’s HyperEngine 5.0 gaming technologies for graphics. The chipset also supports up to a 200MP single camera and 32MP+32MP+16MP triple camera and video recording capabilities at 4K 60FPS with HDR10+. The chipset is capable of handling WQHD+ screens clocked at 120 Hz.