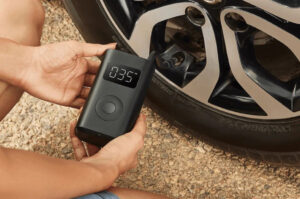 To begin with, the Xiaomi Portable Electric Air Compressor 1S outperforms its predecessor by 45.4 percent in terms of inflation performance. It claimed to be able to inflate tyres up to eight times. The newly launched model claims to be a significant improvement over its predecessors, including a 114% increase in airflow rate over the previous model and a claimed rate of delivering 15 litres of airflow per minute. For comparison, the older model could inflate tyres up to 5.5 times.

It has three different inflation modes, which are Manual Mode, Bicycle Mode, Motorcycle Mode, Car Mode, and Ball Mode. The various modes represent different vehicles, such as Bicycle mode for inflating bicycle types and Car mode for inflating car tyres. Press the mode button five times while holding the light button to enter Pressure maintenance mode. It allows you to self-service your car or motorcycle by spraying foam or water with a PA pot (which must be purchased separately).

It has a built-in LED light and an OLED display that supports the SOS flashing feature and allows you to see the air pressure output. A storage bag, a Needle Valve Adapter, and a Presta Valve Adapter are included with the device. It has a 14.8Wh Lithium battery and a USB Type-C charging port. It was released in India at a retail price of INR 3,499 and will be available for crowdfunding through the company’s official online store for INR 2,299.