The IPS vs OLED comparison is a curious comparison between cheap and expensive phones. OLED and IPS screens appear in almost everything that has a screen in everyday life. And it’s pretty easy to see the difference between these two screen types. Because the differences between them are so obvious that they can be seen with the naked eye.

OLED is developed by Kodak company. The fact that the battery consumption is less and thin has made its use in devices widespread. The last type of diode (LED) family. Stands for “Organic Light Emitting Device” or “Organic Light Emitting Diode”. Consists of a series of thin-film organic layers that emit light and lie between two electrical electrodes. It also consists of low molecular weight organic materials or polymer-based materials (SM-OLED, PLED, LEP). Unlike LCD, OLED panels are single-layer. Bright and low-power screens appeared with OLED panels. OLED’s do not need backlighting like LCD screens. Instead, each pixel illuminates itself. And OLED panels are used as foldable as well as flat screen (FOLED). Also, OLED screens have a slightly better battery lifespan because they turn off their black pixels. If you use the device in completely dark mode, you will notice this effect more.

Pros of OLED over IPS

Cons of OLED over IPS

IPS is a technology built for LCDs (liquid crystal displays). Designed to solve the major limitations of LCD in the 1980s. Today, it is still used frequently because of its low cost. IPS changes the orientation and arrangement of the molecules of the LCD liquid layer. But these panels do not offer foldable features like OLED today. Today, IPS panels are used in devices such as TVs, smartphones, tablets, etc. On IPS screens, dark mode does not longer the charging life as much as OLED. Because instead of turning off the pixels completely, it just dims the backlight brightness.

Pros of IPS over OLED

Cons of IPS over OLED

In the photo above, there is an OLED burn image on the Pixel 2 XL device manufactured by Google. Like AMOLED screens, OLED screens will also show burns when exposed to high temperatures or when left on an image for a long time. Of course, this varies according to the panel quality. It may never be. The bottom keys of the above device appeared on the screen because they were exposed to the OLED burn. One advice for you, use full screen gestures. Also, OLED and AMOLED burns are not temporary. When it happens once, traces always remain. But on OLED panels, OLED Ghosting happens. This is a fixable issue with closing screen for few minutes.

IPS screens are different from OLED screens in this regard too. But the logic is the same. If a certain image is left on for a long time, a ghost screen will occur. While the burn is permanent on OLED screens, the ghost screen is and temporary on IPS screens. To be precise, the Ghost screen cannot be repaired. Just turn off the screen and wait for a while, and the traces on the screen will disappear temporarily. But you will notice after a while that there are traces in the same places while using your device. the only solution is to change the screen. In addition, this ghost screen event also varies according to the quality of the panels. There are also panels without ghost screens.

We will basically compare IPS vs OLED on a few ways below. You can see how good OLED is.

1- IPS vs OLED on Black Scenes

Each pixel illuminates itself in OLED panels. But IPS panels uses backlight. In OLED panels, since each pixel controls its own light, the pixels are turned off in black areas. This helps OLED panels to give a “full black image”. On the IPS side, since the pixels are illuminated with backlight, they cannot give a completely black image. If the backlight is turned off, the whole screen turns off and there is no image on the screen, so IPS panels cannot give a full black image. 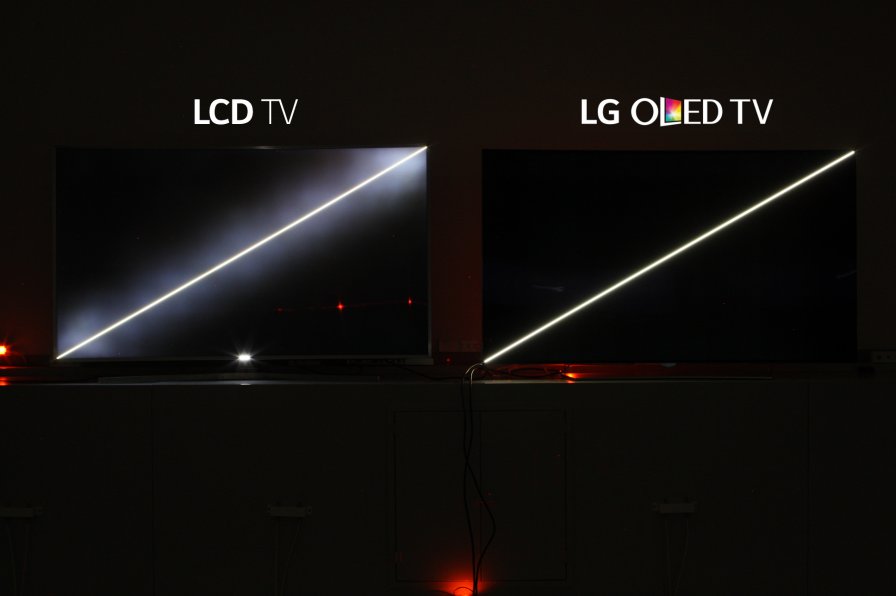 2 – IPS vs OLED on White Scenes

Since the left panel is an OLED panel, it gives a slightly more yellowish color than IPS. But besides that, OLED panels has more vibrant colors and much more screen brightness. On the right is a device with an IPS panel. Delivers accurate colors with a cooler image on IPS panels (varies by panel quality). But IPS panels are harder to get to high brightness than OLED.

In this article, you learned the differences between IPS and OLED display. Of course, as usual, there is no such thing as the best. If you are going to buy a device with an OLED screen while choosing your devices, the cost will be very high if it is damaged. But OLED quality is also much nicer to your eyes. When you buy a device with an IPS screen, it will not have a bright and vivid image, but if it is damaged, you can have it repaired for a cheap price.