The changelog of the new Mi 11X Pro MIUI 13 update released for India is provided by Xiaomi. 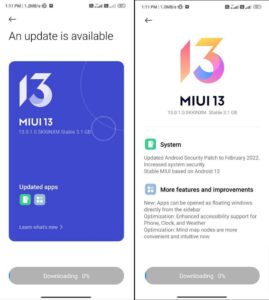 The changelog of the first stable Mi 11X Pro MIUI 13 update released 2 months ago is provided by Xiaomi.

The size of the new Mi 11X Pro MIUI 13 update that has been released is 311MB. This update improves system stability and brings with it the May security patch. Only Mi Pilots can access the update at the moment. If no bug are found in the update, it will be accessible to all users. If you don’t want to wait for your update to come from OTA, you can download the update package from MIUI Downloader and install it with TWRP. Click here to access MIUI Downloader, click here for more information about TWRP. We have come to the end of the update news. Don’t forget to follow us for more news like this.