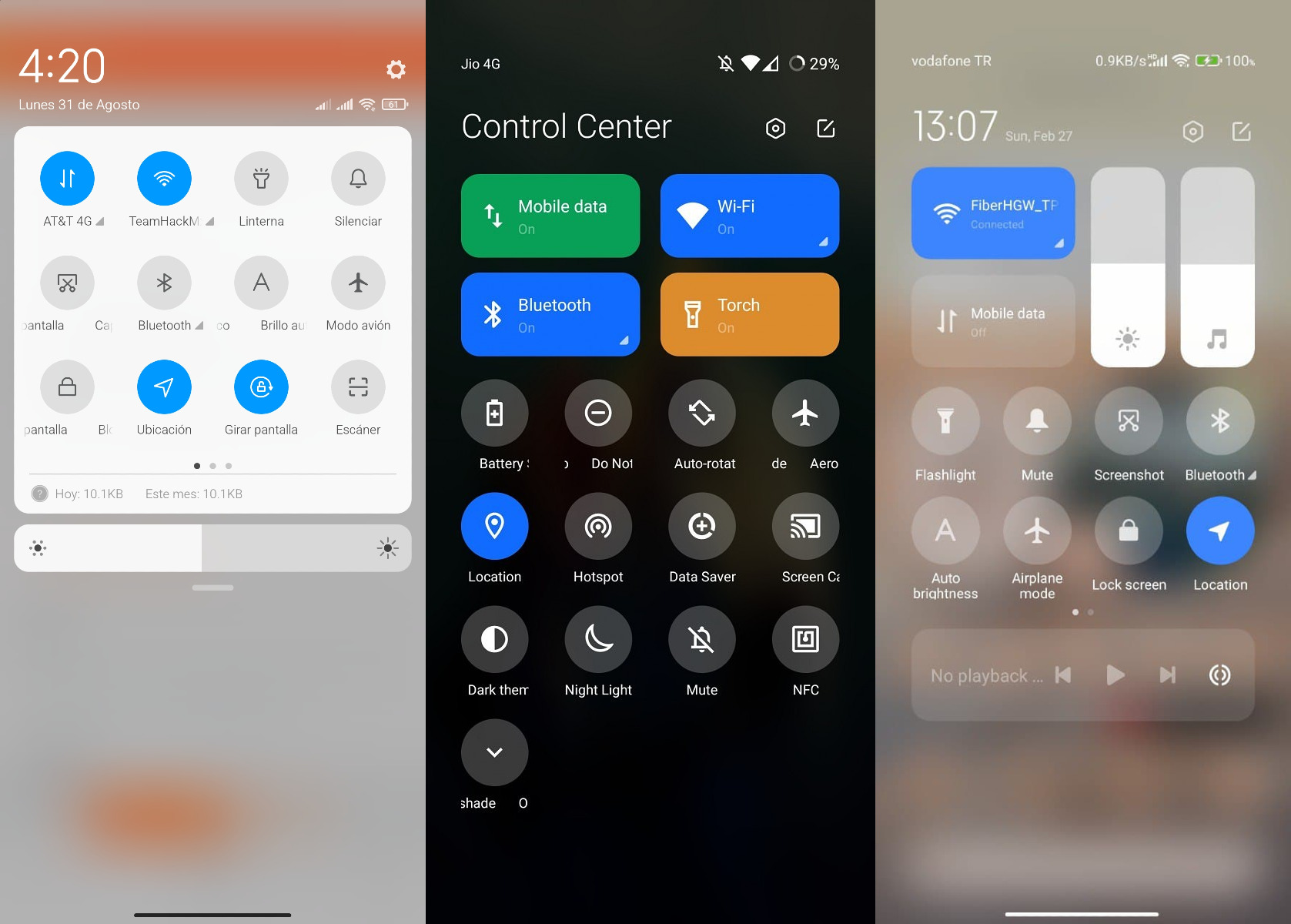 Notification panel/control center has changed a lot in the recent updates. In MIUI 11, we see quick tile icons inside a white square box with brightness bar below and time/date, settings and status bar icons on top. While this was not the worst design an OEM could come up with, it was still rather primitive as we had OneUI design out there that outshined pretty much any other designs.

With the release of MIUI 12, Xiaomi has bettered its game and put up a great rivalry with the new design. Some users still prefer the old ways, and MIUI still offers that option to this day but some believe that this is a change for the better and has already adjusted to the new design. We believe that the new control center is aesthetically more pleasing and comes easy to the eye. On MIUI 13 update, Xiaomi has decided to make even further changes to this control center. We will get into these changes on review part of the content. 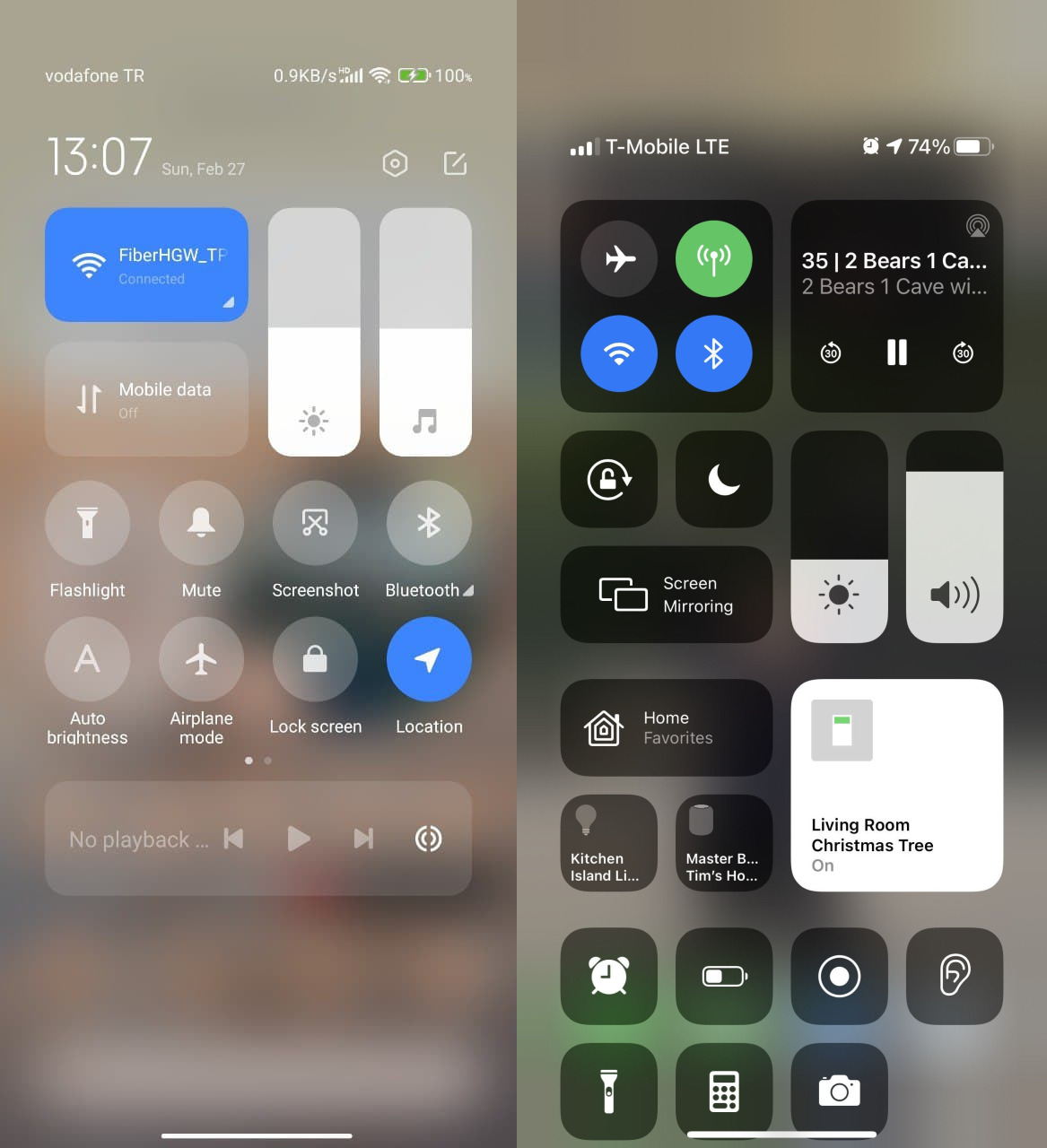 It is not news when we say that Xiaomi has been copying iOS look for quite a while, and control center has only recently joined the game. While it is not an exact replica, the similarities are quite astonishing as can be seen on the screenshots above. Both Xiaomi and Apple prefers rounded box style tiles and MIUI on version 13 relocated brightness bar and added volume bar next to it among the tiles, just like in iOS. This implementation gives the users iOS vibe all the while not being an exact copy. 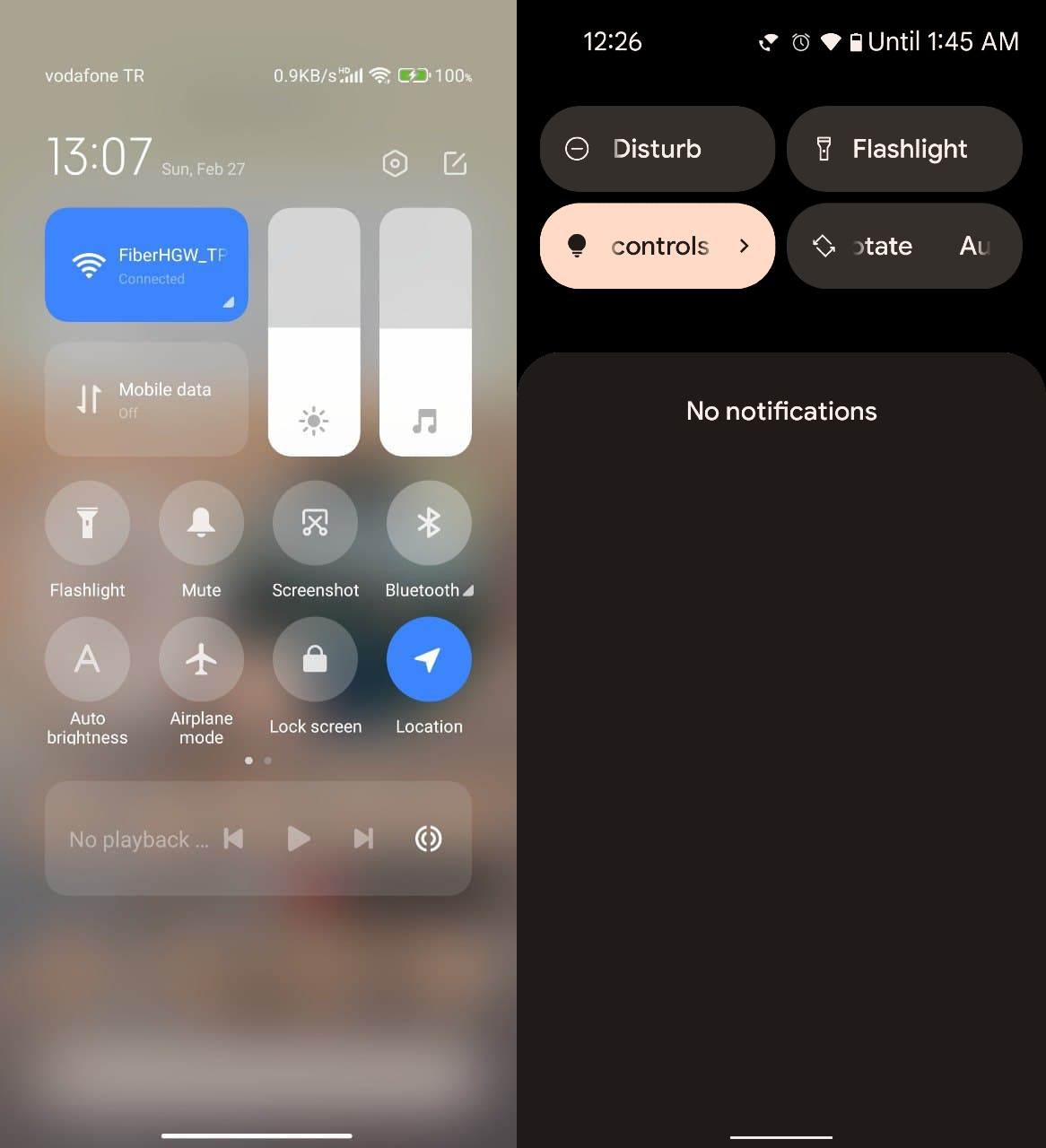 Compared to AOSP 12 notification panel, even though both use rounded squares, similarities pretty much end there. MIUI does not present any indication of inspirations from AOSP in that sense. While MIUI uses blur as background, AOSP prefers fixed colors. One major difference between MIUI and AOSP is AOSP implemented Material You theming system-wide and uses that design for notification panel as well. Tile colors are extracted from current wallpaper set to the system. MIUI still uses its old coloring system and there is no telling what the future hold as of yet.

Many users expected a major change overall the MIUI user interface and these expectations were not met. Control center, despite the slight change of relocation of brightness bar, is still pretty much the same as in the previous version. This relocation is still looking great and adds a premium vibe to user experience, but it is still a minor change.

In this new look, MIUI decided to remove the Control Center title at the top and replaced with time in big fonts and date next to it in smaller fonts. Status bar, settings and edit icons still remain in the same location as they were. Two big rounded squares have been removed and replaced with brightness and volume bars. Below them are the regular rounded tile icons follow, just like in MIUI 12. Lastly, a new media control panel has been added right below the rounded tile icons, which allows you to play next and previous songs in your playlist and to pause the song if you prefer so.

All that we have covered so far has been about design, however another aspect to take into account is usage. Is this new and improved control center usable enough? Especially with one hand? OneUI has come up with a great looking design that prioritize one hand usage, has MIUI made that easy as well? Well, answer to all these questions are “meh”. This response is not to be taken negatively, it is not bad. You can reach into various areas with one hand. It is only that you will be having issues reaching brightness and volume bars, settings and edit buttons as they belong on the top section of this panel.