After the launch of the POCO M4 Pro 5G, POCO India has finally announced the POCO X4 Pro 5G smartphone in India. The smartphone has been launched in India via an online launch event. The POCO X4 Pro 5G is a pretty good smartphone with specifications such as a 6.67-inches FHD+ 120Hz AMOLED Panel, Qualcomm Snapdragon 695 5G chipset, the same chipset that power-ups the Redmi Note 11 Pro+ 5G in India.

The X4 Pro has a triple rear camera setup that includes a 64MP primary wide sensor, an 8MP secondary ultrawide sensor, and a 2MP macro sensor. It also has a front-facing camera with a resolution of 16MP. It also has Dynamic RAM Expansion, a 3.5mm headphone jack, an IR Blaster, and dual stereo speaker support. Out of the box, the device will run MIUI 13, which is based on Android 11. 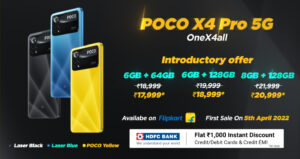