We previously came to know that Redmi might launch multiple products at its March 17th event in China. The GM of Redmi Business Group, China has confirmed that the entire product lineup under the brand will be refreshed at the launch event. The teaser image shared by the company also had silhouettes of multiple other products along with the Redmi K50 smartphone such as an upcoming TV, Laptop, and WiFi router. 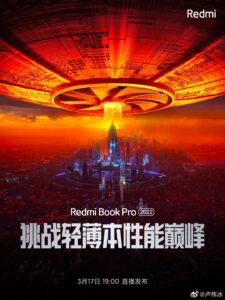 Now, the company also officially confirmed a new product, Redmi Book Pro 2022 will launch in China on March 17th, 2022 at 19:00 CST. The teaser image of the Redmi Book Pro 2022 hints towards the improved cooling system with a better fan. Apart from this, we don’t have many details to share about the device. It will be announced alongside the Redmi K50 lineup of smartphones.

The Redmi K50 lineup will include Redmi K50, Redmi K50 Pro, Redmi K50 Pro+ and Redmi K50 Gaming Edition. They will be powered by Qualcomm Snapdragon 870, MediaTek Dimensity 8100, MediaTek Dimensity 9000 and Snapdragon 8 Gen 1 chipset. Well, just a few days back a new RedmiBook Pro was listed on the Geekbench certification with an Intel Core i7-12650 processor. The processor has 10 cores, 16 threads, and up to 24MB cache, which have helped it achieve an impressive multi-core score of 11,872. It could be the same laptop that is going to launch at the March 17th event.