Redmi has been teasing the Redmi K50 series of smartphones for a long back. The series seems to be pretty interesting as they are claimed to feature many record-breaking features such as the most powerful haptic engine or vibration motor on any Android smartphone, precision-tuned display, dedicated gaming mode with a host of features and much more.

The company has finally unveiled that they will be hosting a launch event on March 17th, 2022 in China to debut the Redmi K50 lineup. It could be the company’s biggest launch event of the year, as they are not launching only the Redmi K50 universe but there are many more products waiting in the queue to be unveiled officially. 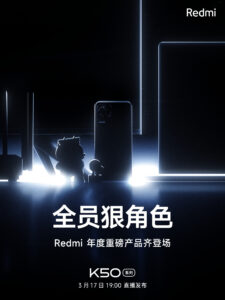 Lu Weibing, GM of Redmi business group China has said that this will be the most important launch for the brand. He further adds that the entire product lineup by the brand will undergo a complete refresh. Not only one or two, but many new products will be announced at the following launch event.

The company has also shared a teaser image regarding the upcoming launch event, which reveals some of the upcoming devices by the brand. The image shows the silhouette of multiple other products along with the Redmi K50 smartphone such as an upcoming TV, Laptop, and WiFi router.

Well, just a few days back a new RedmiBook Pro 15 was listed on the Geekbench certification with an Intel Core i7-12650 processor. The processor has 10 cores, 16 threads, and up to 24MB cache, which have helped it achieve an impressive multi-core score of 11,872. The same laptop is expected to debut at the March 17th event of the company.