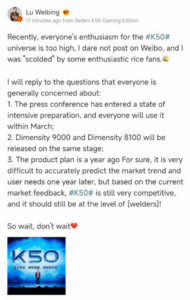 Lu Weibing, president of Xiaomi Group China and general manager of the Redmi brand, has shared a post on the Chinese microblogging platform Weibo throwing some lights on the forthcoming Redmi K50 series. He has reported that the launch event of the series has entered a state of intensive preparation and everyone will use it within March. This confirms that the launch event of the Redmi K50 series can happen anytime soon in the month of March itself.