You all know Xiaomi’s determination to make phones. They dominate phone market with many models under 3 (Mi – Redmi – POCO) brands. Well, sometimes changes can be made in the manufacture process. Sometimes devices released with a few changes or never released.

Alright, have you ever wondered about these unreleased phones? Let’s take a look at prototype/unreleased Xiaomi devices. You probably won’t find so many prototype devices in bulk other than Xiaomiui.

This device unreleased Mi 10 Pro – Mi 10 Ultra prototype. Difference is has a third microphone for audio zoom + includes Dolby Atmos. Camera sensors are HMX + OV48C according to out estimations. Other remaining features same as Mi 10 Pro.

This device is Mi 5 prototype. We think it is unreleased Mi 5 Lite. SoC is Snapdragon 625, specs same as Mi 5 but midrange version for it. We spotted only 4/64 variant.

This is another device that has never been released. This is the Mi Note 3 Pro but with a flagship CPU and small size. Mi 6 Pro has Snapdragon 835 SoC, WQHD LG Curved OLED display, 4-6 GB Hynix DDR4X RAM, 64 GB Samsung UFS 2.1 storage. Case is same as Mi 6. Only camera arrangement and curved are different.

All features same as Mi 8 but only has a notchless screen. Face unlock sensors exist on top notch. Mi 8 started to be developed with the code name dipper. It would be Xiaomi’s first notched device. While testing features such as 3D  face recognition and in-display fingerprint, it was costly for Xiaomi to produce a screen with a continuous notch. To get rid of the high notch cost, he made all the Mi 8 improvements with the codename dipper_old. Dipper_old has multiple prototypes. There is even a model with fingerprints both on the screen and on the back cover. When we look at the teardown images of the device, we can see that the inside is completely different. Dipper_old did its last MIUI test with 8.4.17, and right after that it was changed to dipper codename.

We’ve come to the most complex part of the list. Mi 9T, which we know as “davinci” codename, has so many prototypes. We will list the following in sub-titles from here.

Davinci was originally designed by adding one more camera on top of the POCO F1. Its screen was IPS like POCO F1. The case was made of plastic. In the initial plans, it is clear from the POCO article that this device was prepared only for Global. The processor of this device was Snapdragon 855 and model number was F10. The device with model number F10 is currently Mi 9T, codenamed davinci and uses Snapdragon 730. The device using Snapdragon 855 is F11 and Raphael. Now you can understand why the Redmi K20 series sold in India includes POCO Launcher.

Together with this prototype, they decided to sell the POCO F2 in China. They have determined the name of POCO F2 to be sold in China as Redmi K20S.

On the Pop-Up camera of the Mi 9T, we see the new unreleased Xiaomi logo.

This is the final version of this device that we see as the POCO F2 before it was sold as the Redmi K20 and Mi 9T. It also says AI Dual camera on the back. It is also an unreleased color.

Only the promotional poster is available, it looks like a mix of Mi 9 and Mi 9T. 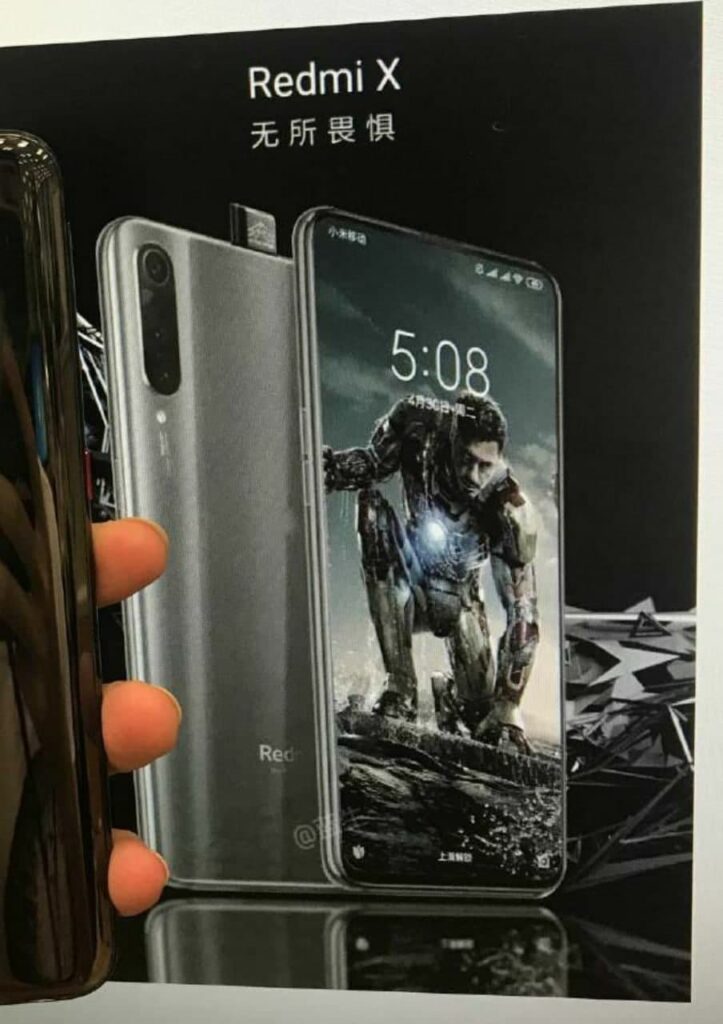 That’s all for now. But there are more prototype Xiaomi devices available. Stay tuned for the rest of the unreleased prototypes.