Xiaomi launched its flagship Xiaomi 12 series of smartphones in China in December 2021, consisting of the vanilla Xiaomi 12X, Xiaomi 12, and Xiaomi 12 Pro smartphone. The device offers a very good set of specifications for a very reasonable price. The fans were eagerly awaiting any official announcement regarding the devices’ global release. The Xiaomi 12 series has already been teased globally, and the device has now been spotted on Geekbench certification, indicating an impending launch.

What Goes GeekBench Reveals About Xiaomi 12?

The Xiaomi 12 has been listed on the Geekbench certification having model number 2201123G. The device scores a single-core score of 711 and a multi-core score of 2834 on Geekbench 5.4.4 for Android. The scores look impressive. The Geekbench further reveals that the test has been done on the 8GB RAM model of the device running on the Android 12. This hints that the global variant of the device might launch with Android 12 out of the box. 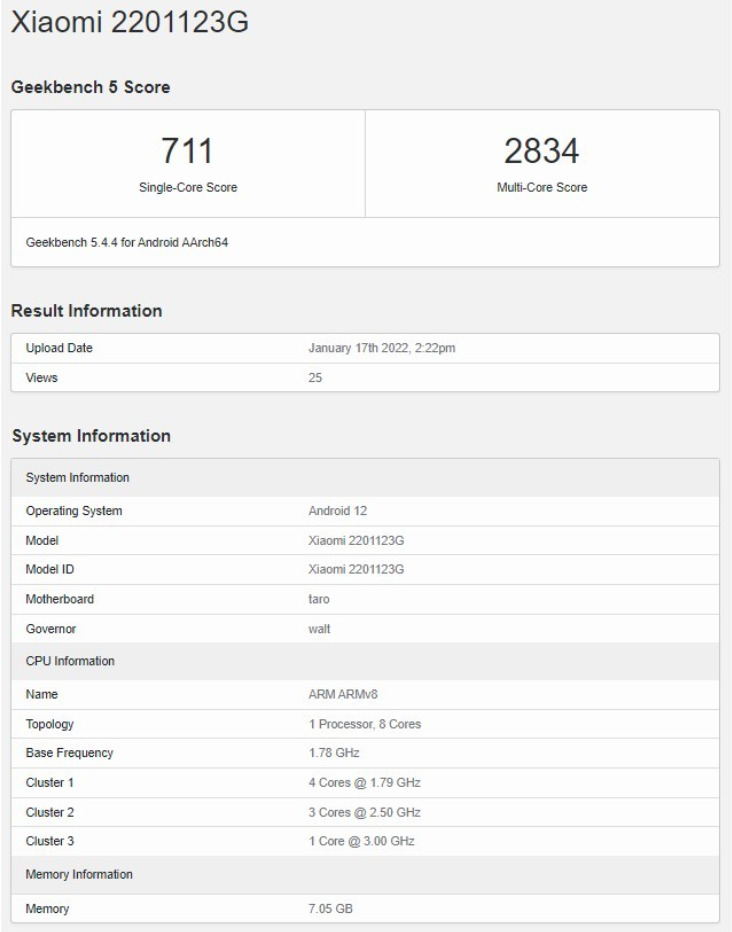 Apart from this, the Geekbench certification doesn’t reveal many details about the global variant of the device. Talking about the specifications, the device offers a 6.28-inches 120Hz curved OLED Display with 1 Billion+ support. It is powered by the latest Qualcomm Snapdragon 8 Gen 1 chipset paired with up to 12GBs of RAM and 256GBs of internal storage. The device flaunts a 50MP primary camera with OIS video stabilization, a 13MP secondary ultrawide camera and a 5MP tertiary tele-macro lens. It has a 32MP front facing camera. The device boot ups on MIUI 13 based upon Android 12 and offers many software-based features such as smart widget, secure mode and a new set of privacy features.