Xiaomi has officially launched the Redmi Note 11 Festival Edition smartphone at today’s launch event. The Festival Editon offers similar specifications. In a nutshell, no changes have been done to the specifications of the device, only some packaging and changes in the look have been done. We get a new fan festival badge next to the Redmi logo on the back of the smartphone. Some additional fan festival stickers and goodies will be provided in the box and the packaging box’s graphics have been changed. Apart from this, there are no changes. 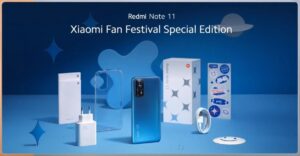 The Redmi Note 11 Festival Edition sports the same specification as the normal variant of the Redmi Note 11S. The device has a good set of specs, including a 6.43-inch FHD+ AMOLED display with a high refresh rate of 90Hz and a 20:9 aspect ratio. It is powered by the Qualcomm Snapdragon 680 SoC, which is paired with up to 6GB of LPDDR4x RAM and 128GB of UFS storage. Out of the box, the smartphone will run MIUI 13, which is based on Android 11.

It has a triple rear camera setup that includes a 50MP primary wide sensor, an 8MP secondary ultrawide sensor, and a 2MP macro camera. It also has a 13MP front-facing selfie camera. It has a 5000mAh battery and supports 33W Pro fast wired charging. The phone is 159.8773.878.09mm in size and weighs 179 grammes.