Xiaomi has new models expected from the Redmi and Civi series. The posting of the Redmi general manager on his Weibo account attracted attention. Lu Weibing, who frequently shares posts with the Redmi K50 Pro, logged on this time with a mysterious Xiaomi phone. There is no model in the device information on Weibo, it appears as a “Xiaomi phone”. Xiaomi Civi S is coming?

The Xiaomi Civi S, the new model in the Xiaomi Civi series that is expected to be unveiled this year, and the Redmi Note 12, which is expected to be the newest model of the Redmi Note series, began to surface with leaks. A Xiaomi model with the codename “zijin” was spotted in the IMEI database months ago and was estimated to be the Xiaomi 12 Lite Zoom model. Later, the Xiaomi 12 Lite Zoom model was canceled and many features were removed and Xiaomi Civi S is coming probably being developed by continuing the same codename. 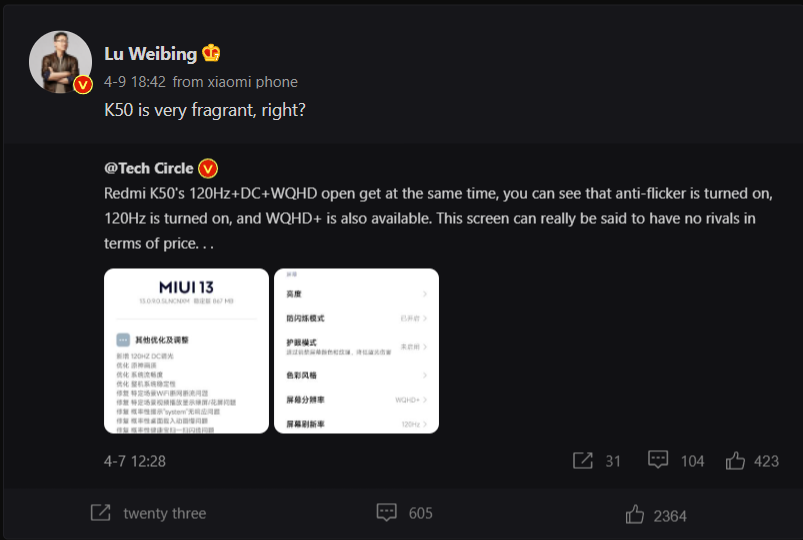 Xiaomi Civi S will use the Qualcomm Snapdragon 778G or 778G+ chipset just like its predecessor. It is expected to use a 6.55-inch curved screen with 1080p resolution and 120Hz refresh rate. Xiaomi Civi S will have the main camera without OIS support, an ultra-wide-angle camera sensor and as in many Xiaomi models, has a macro camera sensor. The new model will come out of the box with the latest software. Xiaomi Civi S ships with the Android 12 based MIUI 13, will receive 3 major Android updates.

The Xiaomi Civi S is coming expected to be in the coming months. It will probably hit the market in April or May. But we have sad news: the Xiaomi Civi S, like its predecessor, will be launched only in China. According to the leaks, it only has the China region ROM.