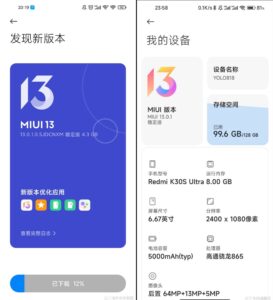 The new MIUI 13 interface increases the system performance by 25% compared to the previous MIUI 12.5 Enhanced interface, while increasing the optimization in 3rd party applications by 51%. This interface is not only limited to increasing optimization, but also brings many new features. Mi Sans includes fonts, wallpapers, widgets, new privacy features and some additional features.

All users can access the Android 12-based MIUI 13 update that has come to the Redmi K30S and Redmi Note 10 5G. If you don’t want to wait for your update to come from OTA, you can download the update package from MIUI Downloader and install it with TWRP. Click here to access MIUI Downloader, click here for more information about TWRP. We have come to the end of the update news. Don’t forget to follow us for more news like this.