Xiaomi global will host a launch event on March 29th, 2022 at 20:00 GMT +8 to announce its upcoming Redmi smartphones. We had previously confirmed that at least two 5G Redmi devices will be launched by the company at the same event. Now, the brand has officially confirmed two of their upcoming 5G supported smartphones, which will be launched in the upcoming global event. The brand also claims that we will get to see The most powerful Redmi Note device. 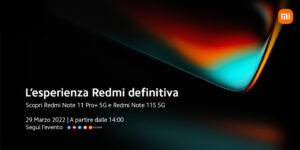 The Redmi Note 11 Pro+ 5G is nothing but the exact same device which was previously launched in China under the same marketing name and as Xiaomi 11i HyperCharge in India. The device was reportedly selling offline before the official launch event and confirms some of the key features of the device such as Mediatek Dimensity 920 SOC, 120Hz AMOLED display, 120W HyperCharge support with 4500mAh battery, 108-megapixels triple rear camera and much more.

Regarding the Redmi Note 11S 5G, it is expected to be the same device that was launched as POCO M4 Pro 5G or Redmi Note 11 5G in China. It will offer specifications such as a 90Hz IPS LCD panel, MediaTek Dimensity 810 5G chipset, 50-megapixels + 8-megapixels dual rear camera, 5000mAh battery with 33W Pro fast charging support and much more. More details about the device will be unveiled at the official launch event.