POCO has finished launching the POCO X4 Pro 5G smartphone globally. Now the device is moving towards the Indian market, the company might launch the device anytime soon. The device has already cleared the India BIS certification with model number 2201116PI. This confirms the Indian launch of the device. Now, we have got exclusive information regarding the complete specifications of the POCO X4 Pro 5G Indian variant. It will be the rebranded version of Redmi Note 11 Pro+ 5G but with some tweaks. 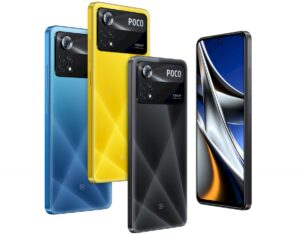 There will be a slight difference between the global and Indian variants of POCO X4 Pro 5G. Starting off with the display, the device will flaunt a 6.67-inch FHD+ AMOLED DotDisplay with a 120Hz high refresh rate, 360Hz touch sampling rate, DCI-P3 colour gamut, 4,500,000:1 contrast ratio, and 1200 nits of peak brightness. It will be powered by the Qualcomm Snapdragon 695 5G chipset coupled with LPDDR4x RAM and UFS 2.2 based storage.

The Indian variant of POCO X4 Pro 5G will have a triple rear camera with a primary camera sensor of 64MP OmniVision OV64B paired with an 8MP secondary ultrawide and 2MP macro camera at last. There’s a 16-megapixels front-facing selfie camera hosed in a centre punch-hole cutout of the display.  The device will be backed by a 5000mAh battery with support of 67W fast wired charging. It can fuel up the battery to 100% in just 41 minutes.

It will come with additional features such as support of Turbo RAM Expansion, 3.5mm headphone jack, IR Blaster, and Dual stereo speaker support. The device will boot up on MIUI 13 based on Android 11 out of the box. Both the Indian variant and global variant will follow the same design language. There won’t be any changes in the overall look of the device.