Realme launched the Realme Q5i expanding its portfolio of Smartphones. The smartphone will be exclusive to the Chinese market. Realme Q5i comes with a 5000 mAh battery and is powered by MediaTek Dimensity 810 processor. The device features a 6.58-inch Full HD+ display with a 90Hz refresh rate. The smartphone comes in two color variants – Obsidian Blue and graphite black.

Realme Q5i is priced at 1,199 Yuan in China, which is around 186 USD. This is the price for the 4GB RAM and 128GB storage version. Orders on the phone can only be placed in China.  Realme is yet to announce the Global availability and prices of Realme Q5i.

Realme Q5i comes with a 6.58-inch AMOLED display with Full HD+ resolution offering a resolution of 1080×2400 pixels and an aspect ratio of 20:9. The device is powered by a 6 nm Octa-core MediaTek Dimensity 810 5G processor. The smartphone runs Android 12 and is backed by a 5000 mAh battery. The smartphone comes with 33W fast charging. 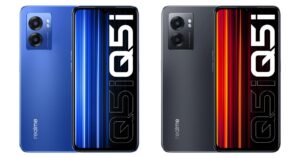 Realme Q5i runs Realme UI 3.0 based on Android 12 and packs 128GB of inbuilt storage that can be expanded via a microSD card. Realme Q5i is a dual-SIM mobile that accepts Nano-SIM and Nano-SIM cards. The device is 8.1 mm thick. It was launched in Obsidian Blue and graphite black. Realme Q5i has a side-mounted fingerprint sensor.

Also read about the Realme Q5 Pro that launched recently