POCO has recently announced its POCO M4 Pro and POCO X4 Pro 5G globally. They might be now preparing for the upcoming device. The forthcoming POCO F4 has now been listed on Geekbench certification which reveals some of the key specifications of the device. The POCO F4 might only launch in global markets. Let’s see why.

An unknown Xiaomi device with model number 22021211RG has been certified by Geekbench. 22021211RC was Redmi K40S. According to reports, the device is the upcoming POCO F4 smartphone. It received a single-core score of 1028 and a multi-core score of 3391. The device listed on the certification was running the Android 12 operating system and had 8GBs of RAM, confirming the device’s 8GB RAM variant. The smartphone was powered by an 8-core Qualcomm chipset with a base frequency of 1.80GHz. This is, of course, the Qualcomm Snapdragon 870 5G chipset. 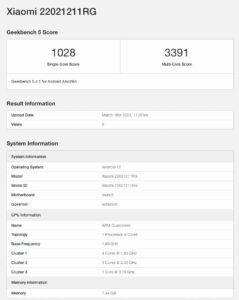 Apart from this, the Geekbench doesn’t tell us much about the device but the alphabet “G” in the model number confirms that it’s a global variant and may not launch in some markets. The device is expected to be the rebranded version of the Redmi K40S smartphone, which was recently launched in China.