Google had announced Android 12L for big screen smartphones and tablets a few months ago.
Android 12L brings a lot of innovations and increases optimization. Developed to provide users with a much better Android experience on large-screen devices, this new version provides convenience when using your device.

Google was expected to launch a tablet last year, but no tablet was launched by Google. Beta 2 version of Android 12L was released in the past weeks and some animations were found in it. These animations are thought to belong to the new Pixel Fold developed with the codename Pipit.

This animation shows how a SIM card can be inserted into a foldable device on the setup screen. When showing a device folded in the animation, there is a button on the right side of this device that allows to adjust the volume.

Almost identical to the previous animation, this animation shows how a SIM card can be inserted into a foldable device, but the same device is shown in an unfolded state. Some sources say that these animations point to Pixel Fold, which was developed under the codename Pipit. 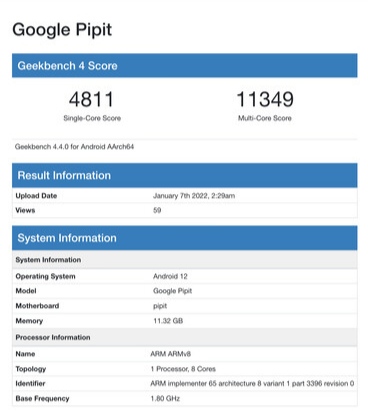 Additionally, a few weeks ago, Pixel Fold surfaced on Geekbench with the codename Pipit, and it looks like this new foldable device will be powered by the Tensor chipset developed in partnership with Samsung and Google. If we talk briefly about Google’s Tensor chipset, it has 2 extreme performance-oriented Cortex-X1, 2 performance-oriented Cortex-A76 and 4 power-efficiency-oriented Cortex-A55 cores on the CPU side. On the GPU side, Mali-G78 welcomes us. The biggest advantage of this chipset is on the artificial intelligence side. Tensor does a much better job at ML performance than any chipset, so it processes images very quickly when taking photos, or never lets you down in language processing such as instant speech-to-text conversion and live translations when detecting speech. Tensor chipset was first used in the Pixel 6 series, and now it looks like it will be used in the Pixel Fold, codenamed Pipit.

Google is preparing to release the stable version of Android 12L and Pixel Fold could be Google’s first foldable device to launch with Android 12L. What do you think about this subject? Do not forget to express your opinion. If you want to be informed about such news, follow us.