If you’re a custom ROM user, or experimented with them before, you probably know that IMEI and some other important stuff of the device gets overwritten and deletes itself.IMEI is like device’s identify; it’s needed so that the country the device is in recognizes the device and lets the simcard work. This guide will show you how to backup them to restore them later so that they won’t get lost.

TWRP/OFOX/any recovery that has backup feature is required for this process. 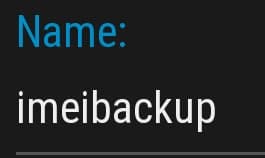 Please keep in mind that instead of only backing up EFS backing up all partitions is highly recommended incase something else also goes wrong. Also, in MediaTek, EFS partition does not exist because it doesn’t use that for storing IMEI. Instead, do the same process but backup these partitions;

In MediaTek the partitions above are responsible for the IMEI. But again as said, full backup is highly recommended instead of only backing up these partitions, anything can go wrong if flashing process was wrong.