Google’s Pixel 6 and Pixel 6 Pro have already made their global debut, however, a recent picture shared on online. It reveals the Google Pixel 6a’s retail box which confirms that Google is all set to release its new Pixel 6a. The source says that it has verified the leaked image but it is only wise to take it with a grain of salt. 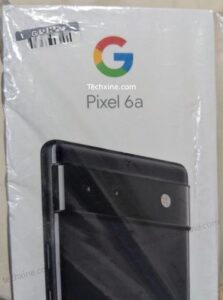 Although the retail box does not have any details about the specs and features, it clearly shows Google’s branding and “Pixel 6a” written on it. The phone’s design looks somewhat similar to the previous models. It has that same distinctive camera bar that stretches across the back of the phone. Let’s take a deeper dive and see what we can find out about the Pixel 6a

Google Pixel 6a Specifications and features

According to the rumors Google Pixel 6a is likely to have a 6.2-inch OLED display powered by Google’s very own 1st-Gen Tensor GS101 Chip accompanied by a Mali GPU. The back may feature dual cameras- a 12 MP IMX363 primary camera and a 12 MP secondary camera same as Pixel 5. On the front, it can have an 8 MP single-punch selfie camera like its predecessor Pixel 6. Pixel 6a is expected to come with a massive 5000 mAh battery. The phone is likely to have 6GB RAM and 128GB storage which cannot be expanded. Google Pixel 6a is expected to come in three colors- Black, White, and Green.

In the retail box, the phone appears to have glossy sides, which give indications of metal but it could also be plastic since it is supposed to be a budget phone. Although nothing is certain at this time.

There is no official information from Google about the launch date of the smartphone but seeing the retail box, it is expected to be launched during the Google I/O developer conference taking place between 11 and 12 May. It will be interesting to see what this new phone has to offer. The expectations are high after the enormous success of the previous models.