MediaTek will be soon announcing its MediaTek Dimensity 8100 chipset, it will be the toned-down version of the flagship Dimensity 9000 chipset. The same chipset is expected to power up the upcoming “Rubens” (Redmi K50/ Redmi K50 Pro) device, However, there is no official confirmation on the chipset yet. The specifications of the Dimensity 8100 has been revealed online now.

Known tipster Digital Chat Station on the Chinese Microblogging Platform, Weibo, has revealed the specifications of the upcoming MediaTek Dimensity 8100 chipset. According to him, the chipset will be based on an octa-core CPU with 4X Cortex A78 performance cores clocked at 2.85Ghz and 4X Cortex A55 power-saving cores clocked at 2.0Ghz. The graphic intensive and gaming related tasks will be handled by the Mali G610 MC6 CPU. The frequency of GPU is still unknown. The chipset will have an L3 cache of 4MB. The chipset will be built on TSMC’s 5nm fabrication process. 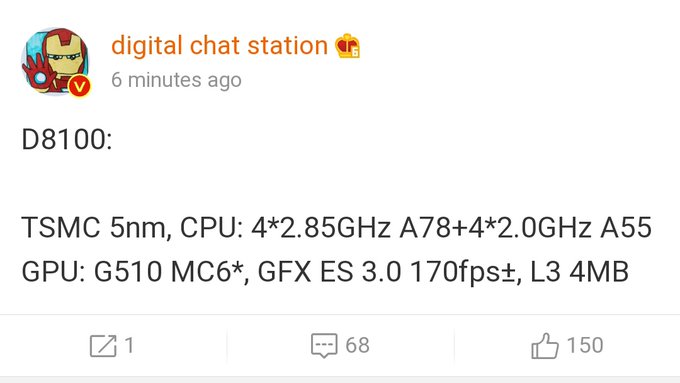 Apart from this, we don’t have much information about the chipset. An official announcement from MediaTek will throw light on the specifications of the chipset. The official launch of the chipset might happen in the upcoming months or anytime soon.