Xiaomi has started teasing the launch of the new device in India. The teaser hints toward the word “Tab” which directly doesn’t reveal any information about the device, but we have got a hint that Xiaomi Pad 5 will launch in India. The Xiaomi Pad 5 is an interesting tablet that packs powerful specifications such as a Qualcomm Snapdragon 870 5G, 120Hz high refresh rate display, 8720mAh battery and much more. 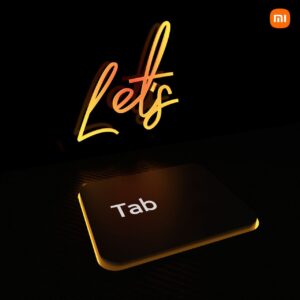 On its social media accounts, the company has begun to tease its upcoming device. It’s the Xiaomi Pad 5 tablet, according to reports. The word “Tab” appears in the teaser images shared by the company, hinting at the same. We also discovered the product’s software build, which confirms that it will boot up on the MIUI 13 based on Android 11 out of the box. Android 11 is correct. It is possible that the company could have gone with the most recent Android 12, which is also now sufficiently old.

The device’s codename “nabu_in_global” confirms the device’s Indian availability with the MIUI build number V13.0.3.0.RKXINXM. Apart from that, we don’t have much information to share about the device; the company is expected to announce the official launch date and additional information about the upcoming device in the coming days.

As for the specifications, the Xiaomi Pad 5 is a pretty interesting device that offers specifications like an 11-inch WQHD+ (1,600×2,560 pixel) TrueTone display with a refresh rate of 120Hz, a 16:10 aspect ratio, and Dolby Vision and HDR10 support It is powered by a Qualcomm Snapdragon 860 SoC and comes standard with 6GB of RAM. The Xiaomi Pad 5 has an internal storage capacity of up to 256GB. It also has a 13-megapixel camera sensor on the back with an LED flash and an 8-megapixel selfie camera with 1080p recording on the front. It has a battery capacity of 8,720mAh and supports 33W fast charging.