MIUI 13 Beta updates have been suspendedd for 2 weeks. Here is why.

Xiaomi is a company founded in China. That’s why Xiaomi doesn’t work during Chinese holidays either. There are frequent holidays in China. The reason why Xiaomi does not update for 2 weeks is this Chinese Lunar New Year holiday. This holiday takes place between January 31st and February 4th. Xiaomi had released the last MIUI China Beta version on 22.1.21. But Xiaomi suspended MIUI Internal beta tests on January 28, with version 22.1.28. Since January 28, there has been no activity within Xiaomi. 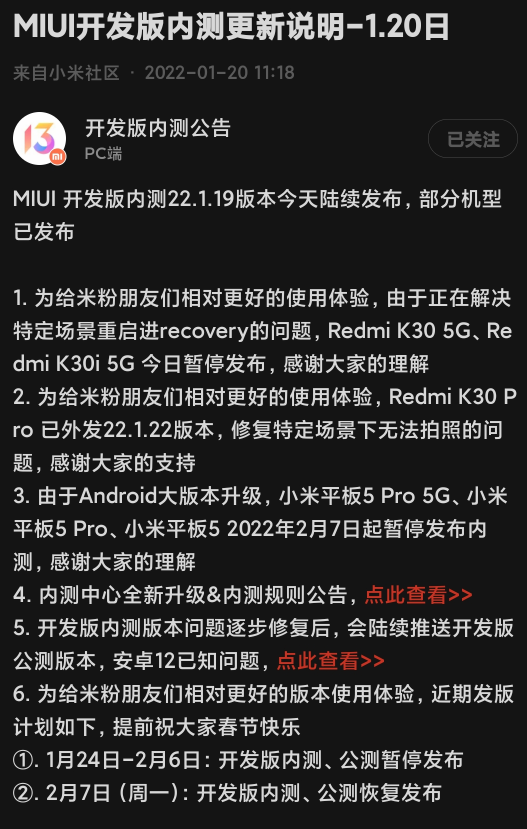 2. In order to give Mi Fan friends a relatively better version experience, the recent release plan is as follows. I wish everyone a happy Chinese Lunar New Year Festival in advance
①. January 24-February 6: The release of the development version of the closed beta and public beta will be suspended.
②. February 7th (Monday): The development version will resume and release the internal beta and public beta

Xiaomi also has made great discounts on many of its products in China for the new year. Redmi Buds 3 made a big discount on Xiaomi Watch and many other ecosystem products during Chinese New Year.

China’s new year, which is considered the longest holiday celebrated throughout the year, lasts for 15 days and turns into a feast where the work is interrupted throughout the country. The ceremonies in the temples, the processions and decorations in the streets, and the customs in the family, the Chinese New Year is a tradition that turns into a visual feast.

Since the Chinese New Year is organized according to the movements of the Moon, it does not have a specific day according to the Gregorian calendar we use. During the new moon phase between January 21 and February 20, when the moon is not visible at all, the Chinese New Year also begins. 12 different animals give their names to these years in turn, and that each year has a characteristic feature; It is believed that those born in these years have unique characteristics. After the year of the Tiger, which will begin on February 1, 2022, Rabbits in 2023, Dragons in 2024, Snakes in 2025, Horses in 2026, Goats in 2027, Monkeys in 2028, Rooster in 2029, Dogs in 2030, 2031 The year of the Pig will be celebrated in , the Year of the mouse in 2032, and the year of the Ox in 2033.

In some sources, it is seen that the Chinese New Year is also referred to as the Spring Festival. The reason for this is that in ancient times, when the movement of the Moon was based on the seasonal cycle, it was believed that the winter was left behind with the onset of the new year and the weather began to warm up. However, since there are many ethnic groups in China, some celebrate the Spring Festival at different times, even if it is the same as the New Year.